Waliyha waited, waited and simply waited. She was certain that he would come to receive her. But, what toggled with her mind was the fact that her mother would panic on not finding her and would subsequently begin searching for her.
Her brain was quick to come up with a plan to stop that from happening. She fished out a pen from her bag while clutching onto her mobile with her free hand and then shoved her bag behind the bushes, taking care to make it as undetectable as possible. Then, she sprinted through several dark alleys that happened to be a shortcut to her home. Her mother was still oblivious of her whereabouts, as the lights were still off. The only thing that surprised her was her Dad’s car parked in the driveway. Maybe he had arrived just to go back to another foreign trip. She swiftly bolted the door, and then looked around for a scrap of paper. Once she found a doable piece, she scribbled down a message that read out her not wanting to be found or contacted.
She took a long sigh, tossed the note through the window of the dining area and made a beeline for the park. She kept a slow pace while going back, as her mind was at ease. In fact she was so relaxed that when she reached, her upper lashes fell gently over lower ones, lulling her to sleep. Her body was exhausted from all the inner commotion, but felt light like a feather. Soon enough, Waliyha was in a dream world, full of flowers, meadows and hearts.
Meanwhile, Waliyha’s mother got a typical womanly intuition that something was wrong. She got off her bed, and proceeded to check on her daughter for a change.
Little did she know that this move of hers would have a negative outcome. Waliyha’s absence shattered her completely. Her heart sunk, and so did the lower part of her body. She covered her mouth with her hands, trying to control a vomit of tears. Panicking wasn’t the solution, and it took Waliyha’s mother quite a few minutes to realise that. She alerted Waliyha’s father about the same. Contrary to her reaction, Waliyha’s father chose to maintain his calm. He thought she would have been at a friend’s place. But then his eyes caught the crumpled up note left by Waliyha. He tried his best to keep his calm even at this point and look for solutions. However, when they headed to do the needful, they realised that they had been locked in.
It was five in the morning, when Waliyha’s parents had received some help. At the same time, the morning rays stroke Waliyha’s cheeks and she woke up only to find no sign of the boy. She checked her phone again and again, even though it wasn’t on silent mode. Her battery was dying and so were her hopes for a happier and better future. But she still continued to dial his number, while walking towards nowhere. She had no idea where she was going. Her legs were shaking, but she still stuck to the path of being lost, till a bus had come to her rescue. She requested the driver to drop her at a chapel, where she could stay safely. The driver agreed very kindly, and drove her down in a matter of few minutes. Several people ogled at her as she entered the home of God.
Now that Waliyha’s parents were free, they began searching for her in nearby places, but failed miserably. They then decided to report this matter in the police station. They tried to trace her sim, and instantly got suspicious of the number that was dialled repeatedly. The police officials called him up and interrogated him about the matter. But, he denied even knowing her! And when they threatened him further, he finally revealed everything, except for the truth. His version of the story turned Waliyha into the culprit.
The assigned policemen had managed to find a social media profile of Waliyha, and before they could gain access to her account, the boy crept into it and deleted every possible evidence.
Just as Waliyha had made peace with her safe zone, the caretakers of the chapel asked her to leave as they had to clean the place. Waliyha moved at once, thinking that if she didn’t they would inform the police. Her eyes were shielded with tears, as she walked towards a playground that was being used by a bunch of carefree children. Returning home wasn’t an option for her, as she felt that her parents would never forgive her, and staying outside meant a struggle for survival.
She perched on the stairway and noticed an old lady cleaning her front yard. Waliyha held her stomach, wishing that her hunger and thirst would miraculously disappear. She walked up to the lady and asked her for a glass of water. The lady stared at Waliyha and then her suitcase alternatively with a look of scepticism.
“Who are you? And what are you doing here?!” She questioned Waliyha sternly. Waliyha was tensed. For a moment she forgot who she was and what was going on with her. The woman preserved her firm look while a thousand and one thoughts crossed Waliyha’s mind.
She gulped down the little saliva that circulated around her mouth, and finally uttered, “I…”

This site uses Akismet to reduce spam. Learn how your comment data is processed. 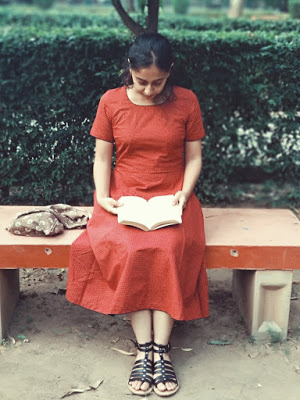